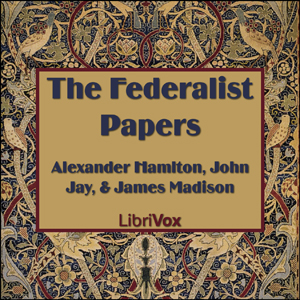 The Federalist Papers (correctly known as The Federalist) are a series of 85 articles advocating the ratification of the United States Constitution. Seventy-seven of the essays were published serially in The Independent Journal and The New York Packet between October 1787 and August 1788 . A compilation of these and eight others, called The Federalist, was published in 1788 by J. and A. M’Lean.

Reviewer: msfry - - September 13, 2020
Subject: about "Choice of Voice"
I have listened to 11 and 12 in September 2020, and unless the sections were indeed redone (not Librivox policy) I found them to be perfectly understandable -- i.e., librivox's litmus test for acceptance of files. Librivox makes no pretense of having professional readers, although many of their readers sound quite professional, and some are professionals. These rude comments are utterly uncalled for and I apologize to Anadaxis_canejia for having to endure them (if he was indeed the original reader).

On the other hand, I have had to skip a few chapters of some books because I could not understand the reader, in which case I have had to go to the online text and read that chapter the old fashioned way.

Reviewer: librivoxbooks - - December 28, 2015
Subject: Choice of Voice
We allow and encourage what we call "Choice of Voice". Anyone who is complaining about certain sections of this project is welcome to submit their own recordings as an alternate rendering.

Reviewer: Bareacal - favoritefavoritefavorite - December 27, 2015
Subject: Reader of Paper 11 shouldn't be doing audio books
What a dork (I use that in lieu of the actual term that applies).
I was thinking as I listened to previous chapters read by female readers that a male voice would be more appropriate - this "guy" kills that theory (and my ability to understand, enjoy or even listen through his stupidity to the content). I agree with previous comment - re-do these chapters.

Reviewer: kc8nc - favoritefavoritefavoritefavoritefavorite - December 30, 2013
Subject: Seeing Both Sides
I would have to agree that it takes some gall to trash a project on account of the reading of 2 of 85 chapters of an otherwise terrific work.
But I would also agree with Lisa L that those two chapters should be redone by someone else. No one can possibly know the readers motives but we can rate the experience. My rating for the reading of those two chapters is a 2 on a scale of 1 - 10 and I gave a lot of credit in that rating for proper pronunciation.
Bottom line is that the project is still really well done and important for people to know. I have time to listen to much more than I have time to read so kudos to all the readers for taking the time to read for this project.

Reviewer: Donald R Miller - favoritefavoritefavoritefavoritefavorite - November 17, 2013
Subject: Of all the Insolence!
Can you imagine the gall it takes for someone to have 85 chapters read for them at no charge and then to trash the entire project because she didn't like the way someone read two chapters? I've listened to the chapters the previous reviewer was complaining about, and they're fine. He isn't trying to do anything other than to read the chapters with the voice and personality he has. Sometimes you just don't like someone's personality or attitude--know what I mean?

Reviewer: Lisa L - favorite - February 8, 2010
Subject: The worst reader I've heard on Librivox!
While many of the readers of the Federalist Papers are quite good, the person reading Fed 11 and 12 is terrible. He reads with a mocking and creepy tone that is so off-putting I'll be skipping all the Federalist Papers (and anything else on Librivox) that he reads. He seems to be purposefully trying to ruin the listening experience. If possible, please get the other readers to redo his submissions and recommend another kind of volunteer work to him!

Uploaded by librivoxbooks on July 4, 2007